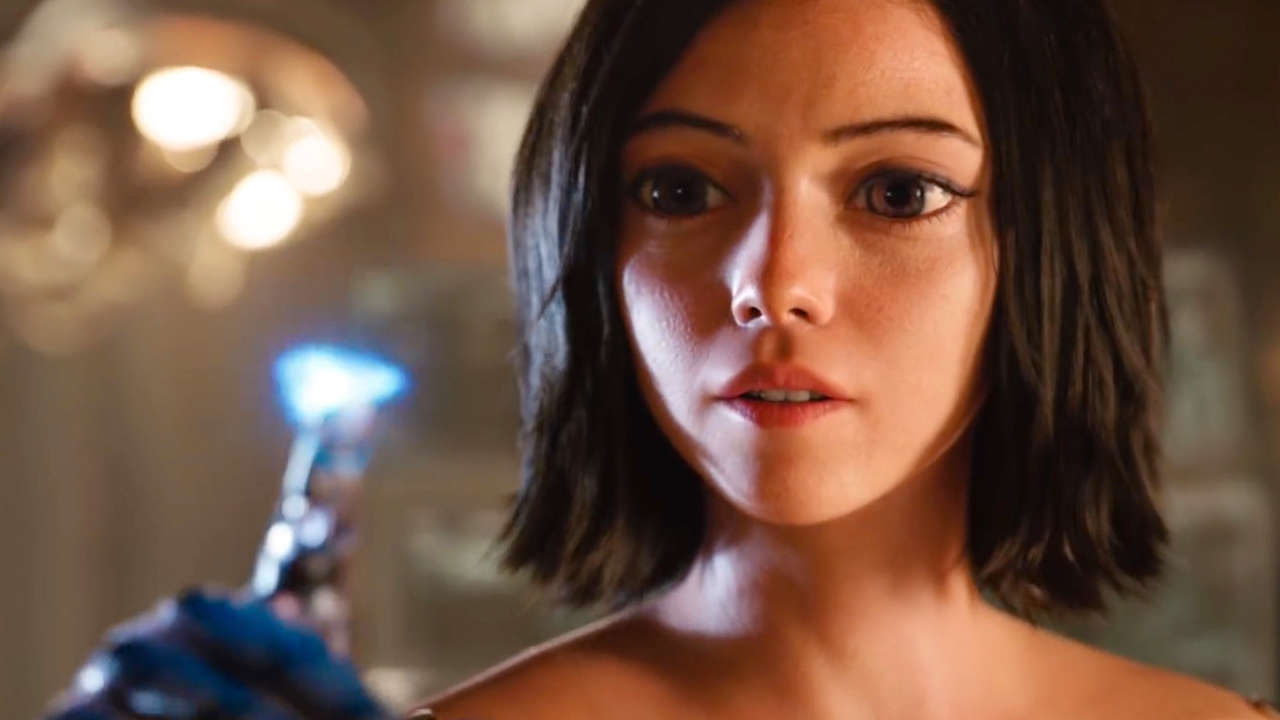 It took me a while to go see it, but I finally did. In double-4K, laser projected, 3D IMAX of course. I figured, why not go the whole nine yards (I might go see it in regular 2D next, I’ll get to why, later). Robert Rodriguez‘ Alita: Battle Angel was highly anticipated, not just by fans of his work, or fans of the material it is based on, but also by the wider movie watching public due to the intense marketing campaign that preceded it (it was all over the social media streams). A big budget sci-fi block buster movie, directed by the maverick filmmaker who’s recently been busy shooting shorts on a blackberry? Well hell yeah. Jim Cameron‘s passion project, entrusted with a fellow innovator and creative mind, while he was (still is) busy making a whole bunch of Avatar sequels all at once. So what did I think of the movie?

Alita (Rosa Salazar) is a cyborg rescued from a trash pile by Dr Ido (Christoph Waltz), who is the fixer of fighters and headhunters in the Iron City, the down trotten metropolis that sits below the floating Zalem, a place where the rich and successful have sought refuge ever since a devastating war against Mars a few hundred years ago. Alita has a teenage girl’s personality and face, and Ido’s former daughter’s cyborg skeleton. Alita’s resurrection by the hands of the doctor catapults her into an adventure in the Iron City, where she falls in love with a teenage hoodlum Hugo (Keean Johnson), who does odd jobs for Vector (Mahershala Ali), the owner of the Motorball tournament, a Rollerball-esque gladiator game who’s winner supposedly gets sent to Zalem. He finds out Ido’s not who he appears to be, and his ex wife Chiren (Jennifer Connelly) is in cahoots with Vector. Curiously however, Alita has fighting skills and pizzazz, so she won’t let things be the way they are, she becomes a fighter….. against evil bounty hunter Zapan (Ed Skrein), against Grewishka (Jackie Earle Haley), Vectors evil thug, and ultimately whoever rules over Zalem…. 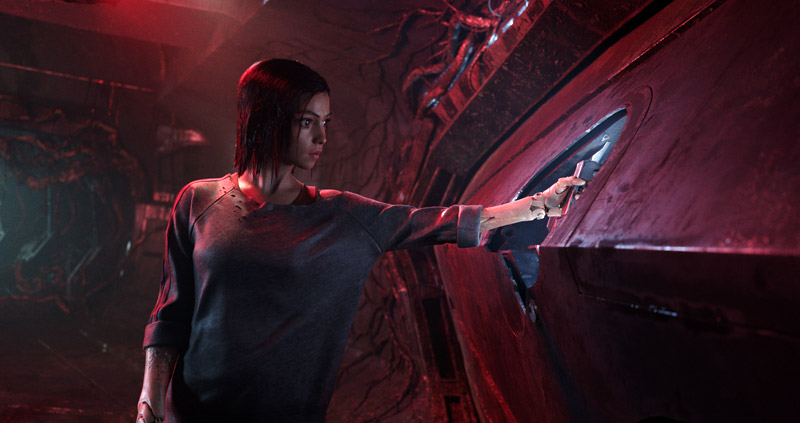 I went into the film open minded, but expected a fairly family-safe sci-fi spectacle with top notch effects, creative characters and lots of gimmickry. On all these counts there was no reason to be disappointed. Alita: Battle Angel is (the odd f-bomb and a few brutal moments aside) a fairly teenage affair, despite a rather serious subtext and certainly a complex backstory (which was drastically compressed for the movie, a lot of it is hinted at – just imagine the universe this flick could spawn). There’s some romance, some violence, some harsh choices, but it’s certainly safe for the family living room. It’s a sci-fi spectacle that can hold its own in the face of competition. True, as many many other flicks with sci-fi dystopias, Alita: Battle Angel is hardly original material. We’ve seen the floating cities, the multilingual ghettos, the neon lights, and even the Rollerball. But that’s not a bad thing. What counts is the execution (the movie is a showcase for awesome effects work, great fight choreography and editing, wow!) and what’s beneath: characters you can identify with, that make you laugh and cry, and put a bit of a twist on the usual concepts. And lastly the gimmickry. This is where Rodriguez shines through (he doesn’t so much throughout the movie, you’d be forgiven if you didn’t know it’s his movie): there’s lots of love for details, stuff that will make teenagers buy merch and then there is probably the biggest gimmick of them all: a bar complete with riff raff that is oddly reminiscent of the Titty Twister (minus the titties). 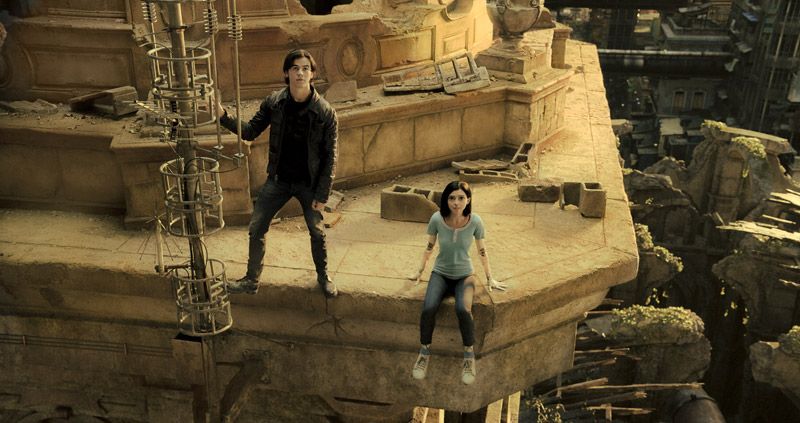 I liked how the movie is a logical next step from his family movies (the Spy Kids series) on the one hand, and his prowess in using the latest digital technology on the other. It’s a movie about the strength of a little girl in a world that’s glitzy in 4K and IMAX  imagery, but not as an end in itself. It’s a world that  lives and breathes, that has stuff going on, food, games, lives, and it’s a story that will grab you as the girl becomes a power full butt-kicker kicking lots of butts, and then playing Rollerball and then kicking butts playing rollerball and then kicking more butts. I don’t buy a lot of the serious reviews of this movie that lament the obvious flaws in the script and what not, and yes it lacks a lot of balance, but hey, in the end what counts is if it’s a damn blast at the movies and if you will feel like taking a few other friends to go see it again, and that it manages with bravado. Robert Rodriguez and James Cameron have managed to pull off a 170 million dollar sci-fi spectacle in the face of competition on all sides: assembly line comic book movies and Star Wars prequels and what have you. Alita: Battle Angel has a lot to offer if you look closely, and a cliff-hanger ending that will make you anxiously await a sequel.

Aside from Rosa who does an amazing job as Alita, and Waltz who is almost reduced to a cameo though, some other Rodriguez regulars like Jeff Fahey (Planet Terror) and Eiza Gonzalez (From Dusk Till Dawn: The Series) appear in the movie as well. You might spot Racer Rodriguez in the flick somewhere, and there are a few other familiar faces like Rick Yune (007 Die Another Day), Casper van Dien  (Starship Troopers) and Jai Courtney (Die Hard 6). As is almost a ground rule with Robert’s movies, this is an adventure for all generations, but mostly for the young and diverse audience of today’s word. The story is all about the future generation, and it’s the young girl who saves the day. There’s a part of me that wishes it would’ve been a longer and more adult film with a lot more of that sci-fi backstory, but if I want that I’ll just get the books it is based on. Doing a tremendous job to build the atmosphere of the Iron City, aside from the stunning effects work and the masterful editing, is a rather pumping soundtrack by Tom Holkenborg aka JunkieXL, who’s got a good track record (Mad Max: Fury Road). 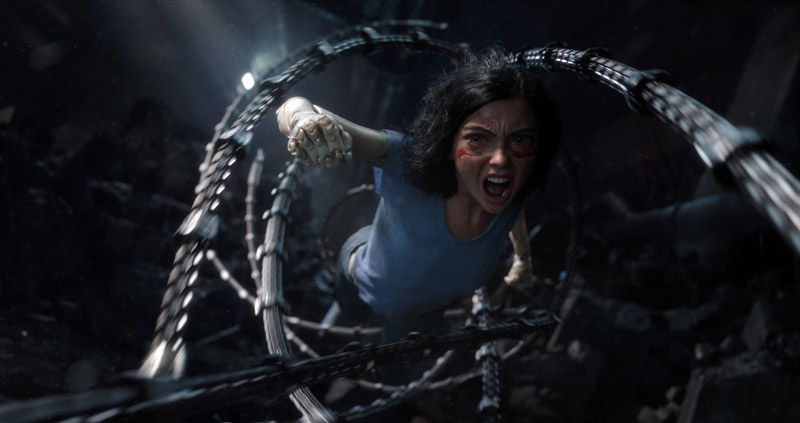 So why am I probably going to go see the movie again, but in good old regular “2D”? Same as with Mad Max: Fury Road, the 3D-gimmickry manages to dazzle, but it’s exhausting for the eyes, and it takes out detail. Especially tough on a cinematographer, if you watch a 3D movie you’re focusing on the center of the screen, as any head or eye movement will either reduce the 3D effect or put extra strain on eyes and head. So you’re left with a movie experience that is immersive on the one hand, but superficial on the other. When watching Miller’s last flick, I was so happy to see it again in 2D because it allowed me to actually notice things that were happening all around the  screen, not just the in-your-face stuff. I hope the same for Alita: Battle Angel. Now that I’ve had the full on 3D spectacle experience, I want to revisit it once again but allow my tired old eyes to explore this world with a tad more focus.

Alita: Battle Angel is already one of the most successful movies of the year, it should draw in a lot more viewers before its theatrical run ends, and there’s plenty of groundwork laid for a sequel, so there’s hope for more adventures in Iron City. I give this two thumbs up, and this from someone who doesn’t at all like superhero movies or comic book adaptations, so believe me when I say I had a lot of fun with this one. Don’t expect the most sophisticated masterpiece, but expect your little world to be rocked by the bad-assiest eyeballiest and sassiest little fighting teenager ever.