Exclusive interview with Robert Rodriguez at the Grindhouse junket 2007 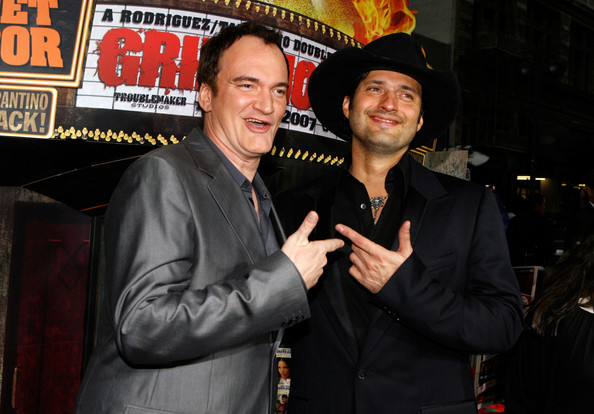 We got to meet Robert Rodriguez at the Grindhouse junket in LA in April 2007. Here is the transcript of our chat with Robert.

Robert Rodriguez: They’ll just see something who they’ll think is very new and different and original, and we’ll look like more original guys, coz they’ll not know what the reference is. They’ll say “that’s kind of a cool idea.. a double feature.. this is kind of a cool…” but this is a whole experience, with the fake trailers and the two movies. And for the people who remember that era it will be a real throwback, but for younger people it will be just something new and different.

T: You’ve gone a long way. In high school I read “Rebel Without a Crew” and I thought I wanna make movies, and I’d watch “El Mariachi” a lot. And then you went so fast, and now you’re building this little Hollywood down there in Austin. How did that go? What are the plans for that? T: Do you think modern filmmakers, especially mainstream filmmakers are learning from what you and Quentin are doing?

RR: Yeah, I think so, because they all wanna have more creative freedom, and have more time, so I think they get what we’re doing and see that we can do anything we want.

T: You’re doing a lot of stuff in HD. When is Quentin switching to HD?

T: Coz you’re trying hard to win him over.

RR: Yeah, well he doesn’t have to coz he’s usually not shooting his own material, so it’s usual somebody else’s problem, but since I work so hard, and do all my post-production, and do my effects, I know what a pain in the ass film is, so that’s why I switched.

T: You even do your own cooking. Did you cook for people on the set?

RR: Yeah, the actors would come into the back and we’d cook, especially have little cook-offs after we’d finished shooting. Usually breakfast tacos, and stuff really late at night. But yeah, I have a whole full kitchen there at my studio.

T: What are you gonna do after Sin City 2? I haven’t heard too much.

RR: Haha yeah Rent 2 or something.

T: You work with a lot of people all the time, like Danny Trejo

T: So these guys, are they like your family?

T: And you just get them some work?

T: Was the Machete character mainly based on the character he’d played in Desperado or is there more to it? Was that the main inspiration?

RR: No, Machete is a character I came up with before Desperado, and for Danny, and I started writing it in ’94, so it’s a much different character. That one was just an assassin, this Machete character is much smarter and cooler. He’s and ex Federale, he does hatchet jobs for the US, and somebody screws him. He knows how to use guns, knives, he’s like a real agent, you know what I mean?

T: (quotes a line from the trailer) “Where are my wife and daughter?”

T: I like watching exploitation films, and I was always wondering about the “screw the ratings, shoot the stuff people want to see” attitude. I am always wondering why more companies wouldn’t go for that, more exploitative elements and so on? Where do you think this is coming from? I mean Grindhouse is going to make a lot of money, it’s not like it’s going to scare people away, seeing some naked women (RR laughs) and violence, it’s not gonna scare anyone away.

RR: Right. I mean, it’s an R-rated movie, so it’s fine. Well I think they might now, they see this example and they go “hey let’s do some more of that”, it’s a very reactive, town, industry. They see something successful and they go make something like that.

T: When I look at all these new horror/slasher movies that are coming out, like the Saw movies, or the Hills movies, I feel like all they do is push the limits in terms of violence, and that’s it. At some point they’re gonna reach a level, where people are just gonna go see it if they’re sick enough to watch that.

RR: Yeah enough of that. They’ll burn themselves out after a while.

T: Are you thinking about doing a horror movie? Just something scary?

RR: No, not right now, there’s too many out there.

T: Being from Europe I’ll see the separate versions of Grindhouse soon. Is it gonna be a lot more footage, or just a little bit? Are we talking 10, 15 minutes, are we talking 20, 30 minutes?

T: So one of the things people are wondering, is why didn’t you guys do more of those fake trailers, coz people are loving them.

T: Are you gonna shoot some for a DVD?

RR: No. We’re shooting for a sequel, hehe.

T: When’s that gonna come out?

T: Are you really thinking about turning some of these trailers into movies? Coz Machete, people are talking about that one.

RR: Those are cool. Machete, yeah I am gonna do that one for sure.

T: Will that be the next thing?

RR: That’ll be the next one that comes out. Probably by the time the DVD comes out.

T: Werewolf Women of the SS, and Eli Roth‘s one, those were so wild. I heard you had to cut those down for the R rating mostly, I heard most of the stuff that had to be cut was from the trailers.

RR: No, it’s not just the trailers, we had a little bit from the movie also, but not much, just a couple things, we just did it kinda for fun and didn’t think about the ratings, and later they were like “you can’t do that, that much”, so we just took it away. It wasn’t a big deal, we got away with a lot.

T: Yeah people say you got a “bold R”

RR: Haha, a huge R. It goes on forever, it’s hilarious, I don’t have it with me, it just goes on and on, something like “strong violence something something war, terror, violence, drug use, this that” and it goes on forever. I thought is this a joke? Is this really a rating? It’s crazy.

T: People are wondering why you are doing kids movies, and then at the same time you’re doing these most violent movies sometimes.

RR: Well I work so much, my kids wanna know “what are you working on?” and I think let me make something that they can see, and that way it doesn’t seem like I am just making stuff they can never see, so, I sometimes make it for my kids.

RR: Yeah, my son is in this movie. He’s the kid who gets shot.

T: Are you thinking about something more like a drama, serious piece or something?

RR: No, hahaha. Naw, life’s too short. Leave that to the professionals.

T: When you watch Quentin’s half, did you have the feeling that, he could’ve done something different, or something more, that, coz you hang out, you work on each other’s scripts and stuff, was there something that you felt that you’d have added or done differently?

T: Some people say nobody would just watch a zombie movie, a sicko movie or just a slasher movie, bu the combination is what does it? I talked to Kurt and he though oh man, when these double features ceased to exist, he felt like somebody took something away from him.

T: You’re still watching a movie, still paying the same, but you just get…

T: Thank you very much.

RR: Thanks man, nice to meet ya.

By Sebastian Haselbeck, March 26, Four Seasons Hotel, Beverly Hills, CA. This transcript has been edited for clarity and space constraints. Pieces might have been omitted from the actual conversation, and the sentences altered for readability.

First published in 2007 at The Quentin Tarantino Archives